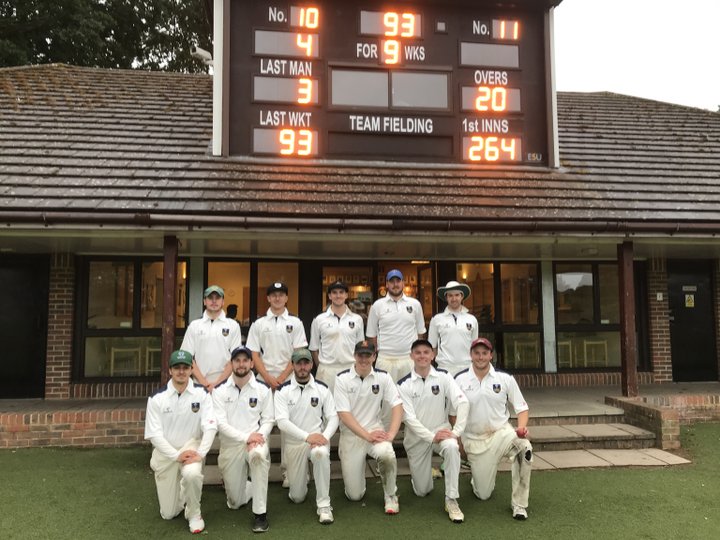 Surrey Championship through to Round 2, with a convincing win over the Tamils

On a wet and overcast day, The British Tamil League won the toss and decided “we will chase it”. After a discussion with the umpires, we worked out that meant we were batting. A delayed start saw the game reduced to 30 overs per side.

Shareef Hassan and Dan Roberts opened the batting well aware that D/L wasn’t in play and if rain interrupted the result would it come down to run rate; with more rain forecast they decided to attack the power play.

An explosive start saw the pair scoring at 10 an over until the first wicket fell in the 8th over with Roberts out stumped for 34 off 24 and the score on 71.

Hassan continued to score quickly with the Tamil dropping him on 2 occasions before being dismissed for a well made 82 off 52 balls.

He was brilliantly supported by Tyler Ward who scored 53 off 37, before Sam Buckell 25 and Matt Nichols 27 completed the innings to finish on 264/7.

A quick turnaround and we got underway with the second innings. The Tamils approach was clear from the first ball with the intention of clearing the boundary at every opportunity. However, Matt Nichols bowled brilliantly removing the top order to take 3/28.

He was followed by Ben Monk who took an all caught 5 wicket haul bowling with excellent flight and guile to leave with figures of 5/16.

Both were supported brilliantly by Jacob Loveridge 1/24, Adam Dyson 1/2 and Nicholas Wilson 0/22 all showing good control and composure as the Tamils attempted to clear the rope at every opportunity. 93/10 and a 170 run victory for the Surrey Champ!

Team spirit was excellent with a real sense of togetherness throughout. Attention now turns to the National Cricket League in Round 2 Wednesday June 19th.