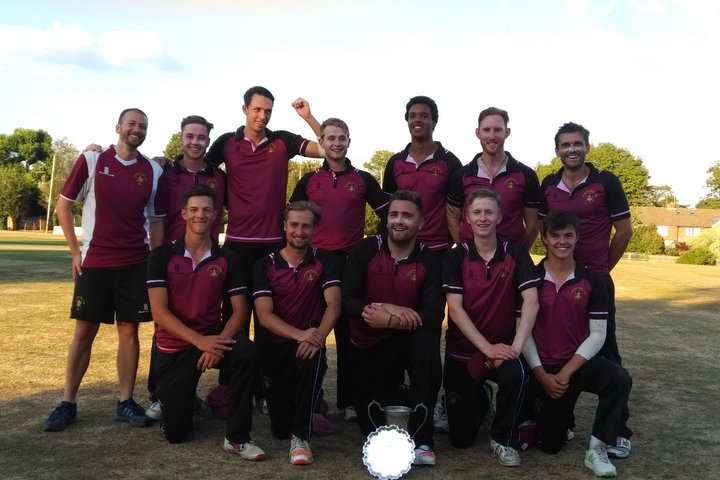 Guildford to take on Roffey of Sussex in national T20 competition

A remarkable day’s cricket saw Guildford claim the Edwards T20 Cup at Sunbury on Sunday – and earn the right to represent the Travelbag Surrey Championship in the National Competition.
Premier Division leaders Reigate Priory and the host club had been expected to slug it out in the final but in the end neither made it.

First Sunbury fell victim to East Molesey, the teams both finishing on 191 to force a bowlout which saw Moles – bottom of the Premier – win 4-3.

Guildford’s 175-6 in the second semi owed much to a quick start from Nathan Tilley (30) and Joel Walker (57) before Joe Pipkin (29) and Fred McMillan (34no) put their side – the only Division One team in the finals – into a commanding position.

With the heat still baking players and spectators alike, the final was soon underway with Tilley (34) and Walker (29) taking advantage of skipper Jack Cunningham winning the toss.

Guildford’s hopes that might be enough on a wearing pitch were hit when Reed smashed 18 from Surrey U16 skipper Geffen’s opening over. But the youngster kept his cool to claim 2-8 in his remaining three overs – including Reed, caught in the deep for 32 – as East Molesey buckled instead, off-spinner Charles cleaning up with 3-5 and the second of two run outs by Oscar Martin finishing the innings for 76, a margin of 56 runs.

It means Guildford now head to the group four area finals day at Horsham on July 29, where they must play Sussex Premier League side Roffey, the winners taking on the victors in the other last four battle between Alton and the Kent League winners.